Long time, no blog post. A good friend recently reminded me of this fact via email and I took the comment to heart. Truth is, I really haven’t felt like writing of late mostly because nothing much of note has been happening. I am quite self-conscious about the fact that when I scribble about something we’ve been up to, there should actually be a something. “Today we went to the beach and sunned ourselves like iguanas” doesn’t really cut it. The French Islands that have been our home for the last month might be worthy of a few words, but those words would mostly be in French, so instead of doing some sort of cultural observational piece – a Francophile “Lost In Translation” – I just didn’t write anything. Maybe later.

Like I said, I did take the comment to heart. So instead of just phoning in a blog post about the mundane, I waited for fate to intervene. It’s life on a sailboat after all, and experience has taught me that something interesting was bound to happen eventually.

Before I begin, I should mention that the crew are safe and uninjured. It kind of reminds me of the kind of phone call you make after crashing a small airplane. “Hi honey, first things first, I’m OK, but…”

We broke the boom.

The boom on St. Somewhere is a seventeen foot long strut made of aluminum. It is six inches high and four inches wide with 3/16 inch thick walls. It attaches to the mast and is allows for control of the mainsail. It’s kind of important for sailing and it snapped like a twig.

Saying “it snapped” is bit of a cop-out, similar to a politician saying “mistakes were made.” Truth is, I was sailing the boat so I broke it.

We were a few hours southeast of St. Bart’s bound for Antigua. The weather forecast was unusual to say the least and we had a 24-hour window of opportunity to sail in favorable winds that rarely occur this far south. Instead of having to wait for a lull in the relentless easterly trade winds to motor southeast, we would take advantage of a rare southwest clocking wind and actually sail! Armed with a forecast of 15 knots of wind with scattered squalls promising wind up to 25 knots, we set out just after midnight.

St. Somewhere was slicing along under full sail at seven knots on a beam reach. The wind speed indicator showed 15 knots – perfect. A quarter moon rose a few degrees above the horizon and the radar was all clear. In a span of 30 seconds the wind climbed to 30 knots and I was scrambling to reduce sail and slow the boat down. We heeled and our speed continued to climb. As the headsail flogged and I hauled on the reefing line, another 30 seconds had passed and the wind hit 45 knots. Our valiant autopilot threw in the towel as the wind shifted behind us and we were officially out of control.

The maneuver that followed is what sailors call a “crash gybe”. Basically the wind is coming from the wrong side of the mainsail and it violently swings to the opposite side of the boat.  If a sailor is unfortunate enough to be standing in the path of the swinging boom, he could easily be killed with a violent blow to the head. I’ve screwed up and crash gybed before. But never in this much wind.

Bang. Zero to shit in 60 seconds.  No rain. No warning.  This was not what was advertised in the brochure.

What followed was a mad scramble to get things under control and avoid doing any further damage to the boat. Needless to say, Irene was awakened by the earlier ruckus of the climbing winds, waiting to jump in. As she now grabbed the helm, I clipped my harness to the jackline and inched forward to the foredeck to sort out the mess. About this time we figured out that the wind indicator was making no sense at all. Swinging wildly in circles, it would appear that the wind was coming from all directions. In the dark, we have learned to rely on our instruments, but now one of them was feeding us nonsense. Why? Because the crash gybe managed to break the sensor off of the top of the mast and it was dangling by its wires. Extra bad news because that same sensor is used to tell the autopilot what direction we are facing. So in addition to structural damage to the rig, our most loyal electronic crewmember was now out of commission.  Whatever happened next, we would be hand-steering through building seas, and now, upwind.

However, there was a lot of good news.  The motor started right up and we had plenty of fuel to return to St. Bart’s.  Other than a minor cut I suffered, courtesy of the jagged edge of the broken aluminum, no one was hurt.  Finally and most miraculously, our sails were undamaged.  It was a long night, but we motored back to St. Bart’s and dropped the anchor to get some rest and regroup.  After a few hours as the winds and seas continued to build, we abandoned the exposed anchorage and continued on to St. Martin where repairs might be possible.

Later that day, we received an email from our weather forecasting service admitting that they got the forecast wrong.  We were not the only boat caught out in more wind than expected in the eastern Caribbean that night.  You win some, you lose some.

Post Script:  The boom is fixed, maybe better than new.  The expert fabricator explained his repair by asserting that “it won’t break at that spot again.  It’ll break somewhere else next time.”  The boat is put back together and we have moved on to yet another island with the unrealistic expectation that soon this might stop being exciting. 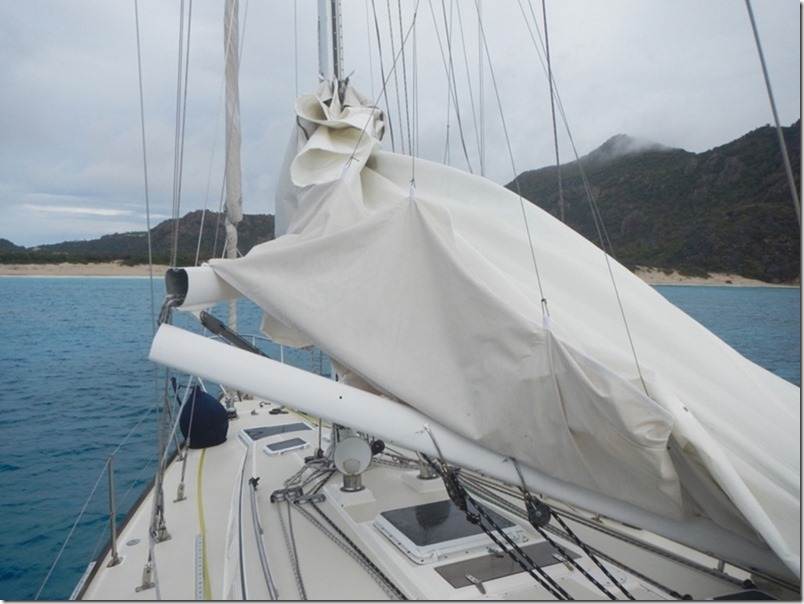